We had it for Thanksgiving yesterday and it was delish! Mine (above) didn’t come out nearly as beautiful as the one over at Detoxinista. I have to tell you again, it was yummy. Just as yummy as the kind with French’s Onions and canned soup ever was… maybe even better. 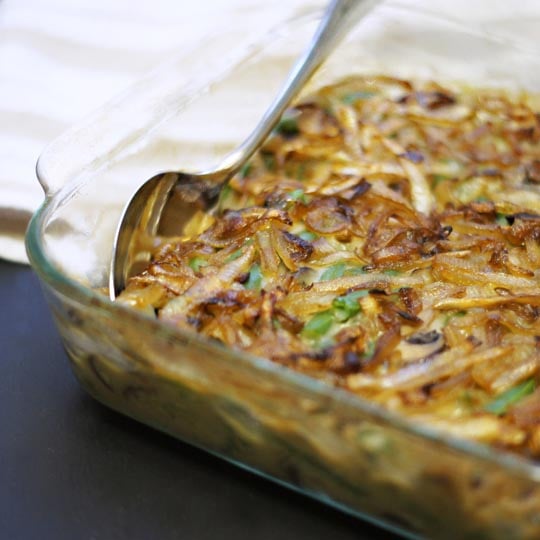 I think the reason was, I did not caramelize the onions long enough. My turkey was done 3 hours ahead of schedule and I was scrambling to get my sides done in time to eat hot turkey. Next time, I will definitely prepare this dish early so I can just slip it in the oven for 30 minutes at crunch time.

Still, it was yummy and it didn’t have the toxic chemical bisphenol A, or BPA found in many canned foods. Campbell’s Cream of Mushroom soup was tested by the Breast Cancer Fund and was found to be very high in this cancer causing poison.

I got all my vegetables from Stone Valley Coop in Poultney, Vermont. This recipe called for green beans, onions, mushrooms, parsnips and garlic, all organic and locally grown.

I added feta cheese and white pepper to the parsnip sauce for flavor.

Let me know if you try this recipe. Christmas is coming. I know I will be making it again!